Unveiling the Life-size Bronze "Nanning 374: Spirit of the Friesian" 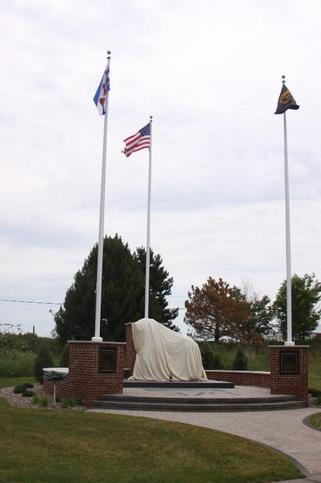 On June 23, 2012, on Fenway Farms near Hortonville, Wisconsin, over a hundred people arrived to celebrate the unveiling and dedication of the bronze of Nanning.  Many in the crowd knew Nanning better than I had.  I'd only seen him once in real life, and that for only a few moments.  But they say I captured him, which is what I was striving for.

Here you see the whole memorial with the 374" tall flagpoles because Nanning's number was 374.  The shape of the monument is based on Nanning's front shoe, with columns where the toe clip and heel caulks would be. The cobblestones that make up the floor inside the horseshoe are reminiscent of the streets of The Netherlands, where Nanning came from.  The dark rectangles on the front of the columns you can see are plaques that I had made which have busts I sculpted on them.  I'll post a picture of those below.

The People in Nanning's Life - plus me.