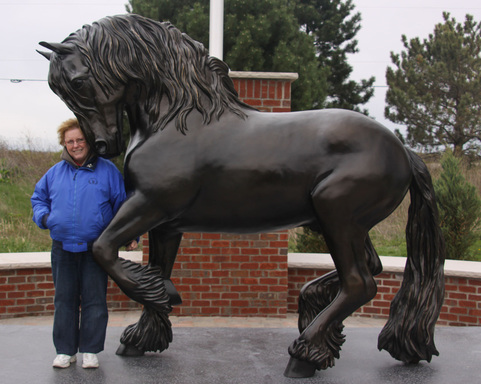 Lynda Sappington with her bronze of Nanning 374 the day it was installed.
Primarily a self-taught artist (her college degree is in music), Lynda has taken equine sculpture workshops from Gwen Reardon, Kathleen Freidenberg and Karen Kasper, all at the Kentucky Horse Park; an AAEA workshop with Morgen Kilbourne in Aiken SC; a stone sculpture workshop from Annie Pasikov in Colorado; a figurative workshop from Philippe Farault at Philippe's classroom in Honeyoye, NY; a figurative sculpture workshop from Tuck Langland at the Scottsdale Artists School; and an AAEA painting workshop from Elin Pendleton at the Kentucky Horse Park. Lynda has also taken workshops or classes in mold-making, resin casting, patinas and drawing to improve her skills. She is currently taking a palette knife painting course with Jennifer Vranes and painting lessons with Bruce Marion has already sold several paintings. You can see her paintings at www.LyndaSappington.com.

Lynda Sappington's work is internationally collected, and has been in galleries from California to Ohio to Florida to Wisconsin. Her sculptures are also in use as trophies all over the USA and in Canada, both as championship trophies and year-end awards. Three of her bronzes are at the Kentucky Horse Park: "Elegance" as a perpetual trophy in the Friesian Horse of North America (FHANA) headquarters, "Frolic" as a perpetual trophy in the US Dressage Federation (USDF) headquarters, and "Harmony" in the USDF Hall of Fame. Two of her trophies are the top trophies (Grand Prix and Grand Prix Special) at the Palm Beach Dressage Derby in Wellington, Florida.

Lynda is not only an award-winning sculptor and painter, but a writer, as well. The first edition of her book, "Sculpting 101: A Primer for the Self-taught Artist" sold out. The second edition, which has been completely revised and had two chapters added to it, is available through this website as well as Amazon.com and other outlets.

Lynda's awards have earned her a place in Marquis' Who's Who in the Midwest, Who's Who in America and Who's Who in American Women. One notable international art award she won is the Joel Meisner Company Foundry Award from the American Academy of Equine Art in their Fall Showcase in 1998 at the Kentucky Horse Park. Her bronze, "Ecstasy" won Best in Show 3-D at the Black Stallion Show in Florida that  celebrated the 50th anniversary of the first publication of the Black Stallion books.

In 2011, Lynda created a life-size sculpture of the Friesian stallion, Nanning 374 (shown above).  It was installed at Nanning's owner's farm in Wisconsin April 19, 2012.  A second casting of this piece was installed on a private farm in Ohio in 2013.

Lynda has written articles for numerous publications, including Equine Images, Horses in Art and The Equine Art Guild's newsletter, "The Palette." From 1998-2002, Lynda was Editor-in-Chief of ARTVoices, an online art magazine that was part of the ARTFaces | ARTPlaces gallery, as well as an AFAP Vice President and Board member. She contributed many articles to ARTVoices, including a regular column on sculpting called "Sculpturally Speaking."

An article in the "Bits and Pieces" section of the June/July 1998 issue of The Equine Image magazine featured her sculpture "Presence" and the Mid-Ohio Dressage Association trophy made from that edition. In 2008, Lynda was interviewed as one of several featured artists who make trophies (including the artists who make the Oscars, the Emmys and the Country Music Awards) in A&E Magazine.

Lynda's sculptures were featured on the cover of "The Chronicle of the Horse" magazine seven times. She's been interviewed for a show on RFD-TV and for several other magazines and newspapers. Her work has appeared in "Southwest Art" magazine, the Ascot Race Program in 2013, "Art in America" and many other magazines as well as some coffee table books.